Pioneer Aero Service continues to be the one and only “One Stop Mustang Shop” for all your P-51 Mustang parts needs.

After 23 years of working in production, manufacturing & material control, Bret's father Elmer Ward approached him with an opportunity to manage his recently purchased P-51 parts company, Pioneer Aero Service. He was challenged with the task to run an industry retail business but brought with him a lengthy background of experience he had gained over the years. As the owner of Pioneer, Bret's goal was to always create a service-oriented business that provided customer service and quality products. In 2005, Bret retired from Pioneer with the confidence that Ginny and Greg would continue to operate the company just as he had established. Bret continues a limited involvement with Pioneer and spends most of his time tending to his grapevines, bottling his own wine, and traveling between Oregon & California.

Having over 10 years of experience working as an accountant and bookkeeper, Ginny came to work for Pioneer Aero Service in 1995. From 2000 to 2004 Ginny began to work double duty by working in the same capacity at both Pioneer Aero Service and sister company,  Square One Aviation. While enjoying her love of the P51-D Mustang she continues to learn more about the P51-D Mustang. “You learn something new every day.” It has been a joy talking to and getting to know her customers worldwide. In 2005 Bret decided to semi-retire leaving Ginny to run the company in Bret’s absence.

“Working in this field with this beautiful aircraft and customers I consider friends, has been a blessing and a dream job. Not everyone can hear the roar of a Rolls Royce engine from their desk!”  Ginny lives in Chino. She has three sons and eight grandchildren. Together with her husband, she enjoys golf, traveling, and spending time with her family and friends.

With over 40 years of experience in inventory control, purchasing, production planning, and quality control, Greg joined the Ward team in 2001 at Square One Aviation. While spending most of his career manufacturing such mundane items as weapon systems and scientific equipment, the opportunity of a lifetime presented itself allowing Greg to use his skills while being around the most beautiful aircraft ever designed. With the demise of Square One Aviation, Greg moved to Pioneer Aero Service in 2004. In his position as Materials Manager, Greg is tasked with inventory control, production planning, interfacing with vendors, purchasing, and quality control.

Greg says, “I really enjoy the fact that I get to use all of my skills in this smaller company as opposed to being stuck in the cubicle world of large manufacturers. Also, I get the chance to talk to people from all over the world supporting this magnificent airplane.”

In August 1975, avid flier Elmer F. Ward purchased a P-51D Mustang which was once owned by Universal Studios and used in the movie “Battle Hymn” starring the late Rock Hudson. Elmer then did a complete restoration of the aircraft and gave it the authentic tiger-striped paint scheme of Colonel Clairborne Kinnard Jr.’s “Man O’ War”.

As much as Elmer enjoyed flying he also knew that maintenance was the key to safe flying. As the owner of his own mechanical engineering company and educated in the field of mechanical engineering, Elmer did all of his own maintenance and would purchase needed parts from the long-standing Burbank California company Pioneer Aero Service. In 1984 Joe Friedman, then owner of Pioneer Aero Service, decided to retire and contacted Elmer to see if he was interested in purchasing the company. With past experience of working with the Rolls-Royce engine during the war, his passion for the P-51 aircraft, Elmer took little time in deciding to accept Joe Friedman’s offer.

Lacking the needed time to devote to his new acquisition, Elmer brought in his oldest son Bret who had a background in material control to manage Pioneer. With a strong desire to be the best at supporting parts for the Mustang aircraft, Bret and Elmer purchased the parts inventory in 1987 from Lefty Gardner and Gordon Plaskett of Cavalier Aircraft Corporation  This acquisition was significant because it created a stockpile of parts, drawings, and tooling that put Pioneer Aero Service as the largest supplier of P-51 mustang parts in the world.

Elmer always had the desire to build “the best Mustang anyone has ever seen”. With the new collection of parts, Pioneer embarked on a mission to build a single-seat “D” model and a “TF” dual control Mustang. The result of this endeavor raised the bar of the Mustang as it was known at the time. In 1995, after building two “P51-D” and two “P51-TF” aircraft, a business decision was made to separate the restoration and maintenance side of the business from the parts business. The result was the formation of Square One Aviation. This now allowed Pioneer Aero Service to concentrate only on the manufacture and selling of new and surplus parts. 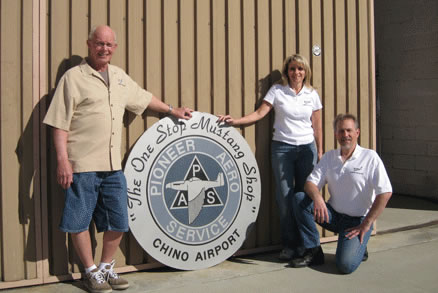 Pioneer continues to supply an inventory of original North American “New Surplus”, “As Removed” and “New Manufactured” parts. All-new “D” manufactured parts are made to the original North American drawings. Certifications are kept on hand for each part manufactured, so buyers can be assured they are getting only quality and airworthy parts. Pioneer also stocks many specialty items, which are not found in the parts manual. The Mock Gun Kit gives the look of six .50 caliber wing guns while leaving the gun bays open for storage. The Stainless Steel Hydraulic Line Kit provides an eye-catching set of wheel well hydraulic and brake lines. Pioneer also carries fabric furnishings and can even provide a custom order, which may be needed by our customers.

Although Bret retired in 2005, he left Pioneer Aero Service in the best hands possible with Ginny & Greg who have a combined 40+ years of experience and training at Pioneer. 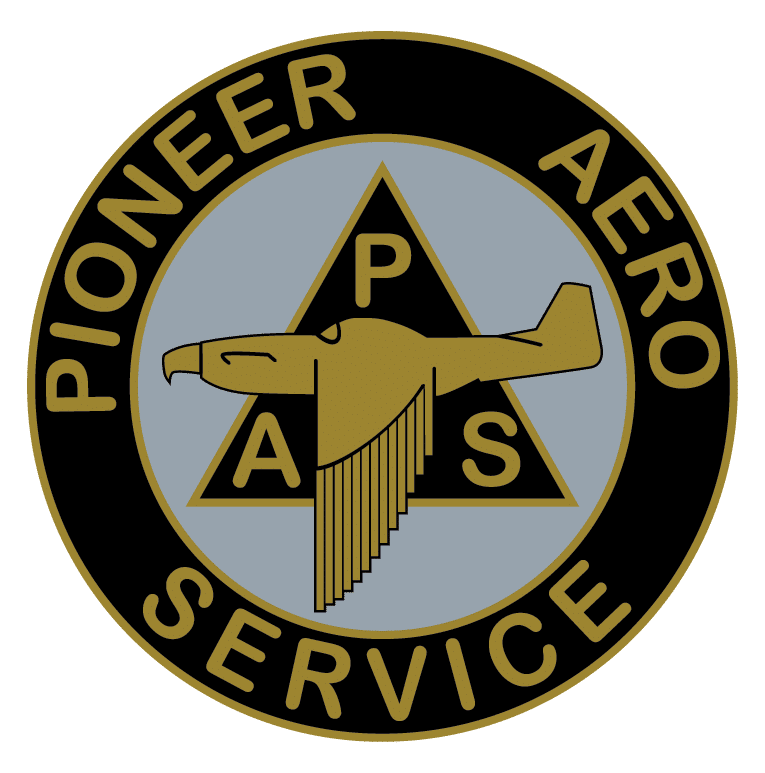 Looking for hard to find parts?

Browse our selection of P-51 Mustang parts or send us a photo of what you're looking for.