This P-51D Mustang, tail number 44-72739, was built in the North American Aircraft factory in Inglewood, California on February 15, 1945. It was then shipped to the fighter pool at Stanstead England in March of that same year. Too late to see combat in WWII, it was returned to the US and assigned to the New Jersey National Guard.

P-51D 44-72739 sat until it was reclaimed by the US Air Force in 1950 for service in the Korean War. But again did not see any combat action. It was finally returned to National Guard duty until declared as surplus and auctioned off in 1956. 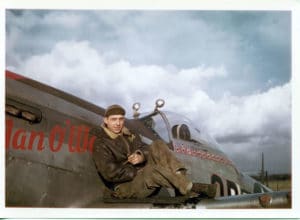 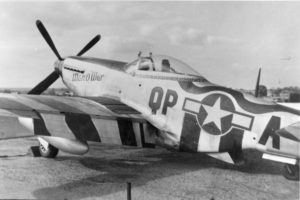 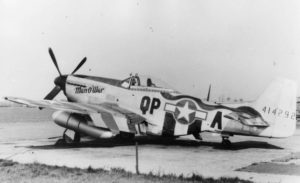 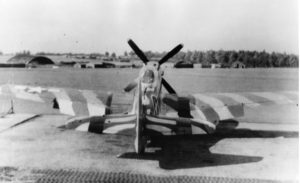 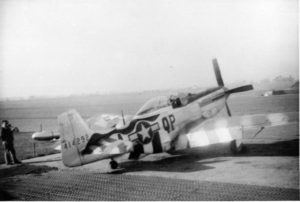 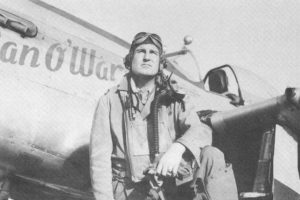 Purchased by Universal Studios in 1957, the aircraft was displayed as part of an attraction that required a WWII fighter aircraft. Most notably the aircraft was used in the 1957 movie “Battle Hymn” starring Hollywood actor Rock Hudson. The aircraft had numerous holes punctured into it in addition to other deliberate damage to simulate a bullet-ridden aircraft and was kept outside in the open for several years. With a stripped cockpit and engine compartment, an electric motor was mounted inside the nose to drive a “fake” propeller. It was retained by the studio until 1970 when it was auctioned after it was decided to build a new attraction.

In August 1970, Ascher Ward purchased the aircraft from Universal Studios and it was towed to Van Nuys Airport where it stayed for a short period of time. It was decided to move the aircraft to Chino, CA where it underwent restoration at Aerosport hangar. The P-51D aircraft was registered as N44727 in 1972 and carried the nose art “Poontang”, possibly that of Lt. Ernest W Hopcroft’s P51D, 436th Fighter Squadron, 479th Fighter Group.

The Man O' War is Born

In 1974, avid flier Elmer F. Ward (no relation) purchased the P-51D Mustang from Ascher. After the purchase, Elmer gave it the paint scheme of Colonel Clairborne Kinnard Jr.’s “Man O’ War”. As much as Elmer enjoyed flying he also knew that maintenance was the key to safe flying. As the owner of his own mechanical engineering company, and educated in the field of mechanical engineering, Elmer did all of his own maintenance on Man O’ War.

Elmer continued to fly Man O’ War for over 25 years and he was widely known across the industry as someone who was friendly and always eager to talk shop with fellow pilots. Elmer passed away in 2007 and left behind a solid legacy in the P-51 Mustang world. 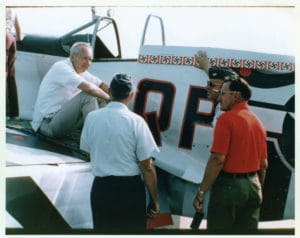 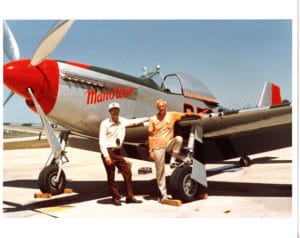 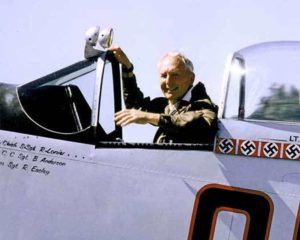 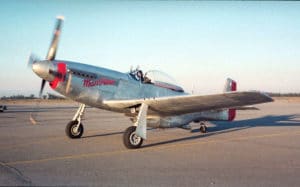 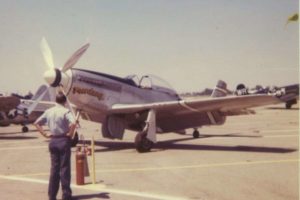 A Ride of a Lifetime

In 2010, Elmer’s sons Bret & Todd Ward leased Man O’ War to the Commemorative Air Force where they showcased it at their Southern California Camarillo location. It was also toured to many airshows across the country and sold rides to anyone who wanted to experience a ride in the premier World War II fighter plane. For 10 years the legacy of Elmer Ward’s Man O’ War was able to live on and be seen by many warbird enthusiasts.

A New Chapter Begins in the California Desert

In May of 2020, Man O’ War found a new home at the Palm Springs Air Museum where it will continue to showcase its legacy.